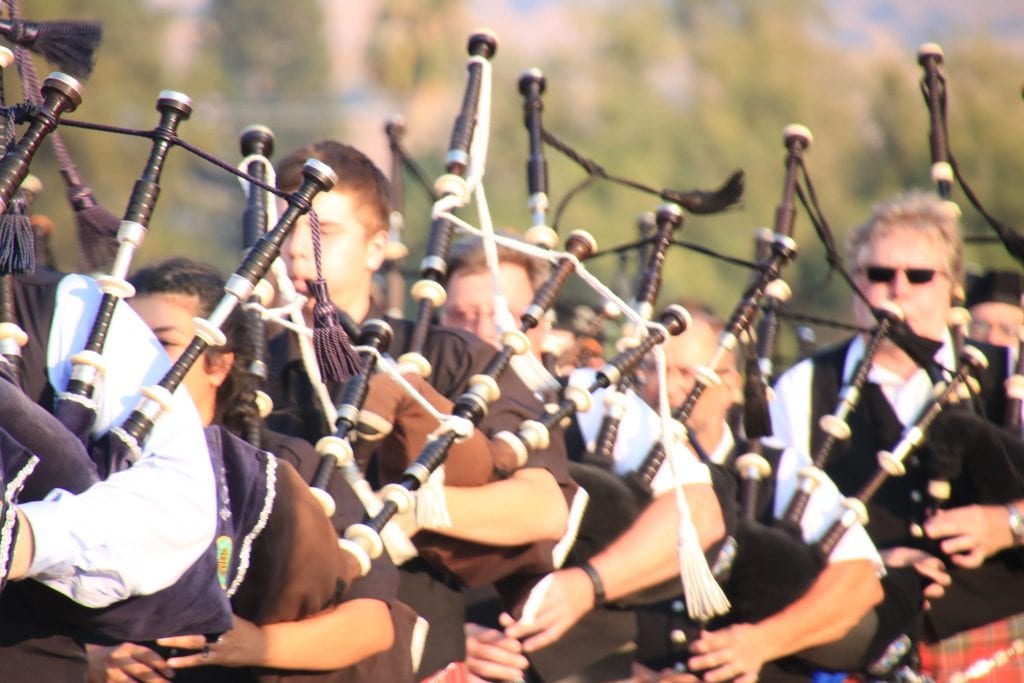 Thirty-five-plus pipe bands and a U.S. Marine Band in a gala presentation is but one part of the huge celebration of everything Celtic at the Scottish Highland Gathering &amp; Games.

Regarded as one of, if not the largest such gathering in the world, the Games have been presented by the Caledonian Club of San Francisco since 1865. The Games moved to Northern and Central California’s largest fairgrounds in Pleasanton 26-years ago in order to accommodate the 25 different venues, that include the 800-plus pipers and drummers, the 45th U.S. Invitational Heavy Event athletics, the Western States Highland Dancing Competition, seven stages of continuous traditional and Celtic Rock entertainment, historic pageantry with Mary Queen of Scots and her Highland Warriors escorts, plus so much more. Add a 100 clan area, Irish Step Dancing exhibitions, falconry, highland cattle and five-a-side soccer, Rugby and Shinty tournaments, and you have a full day’s worth of entertainment.

The U.S. Marine Band performs daily with a world-class pipe band in marching and stationary formations, interspersed with the military brass band and the pipers and drummers. Viewed only at these Scottish Games, the Marine/Pipe Band performance is part of the daily Closing Ceremonies along with the 35-plus pipe bands from the U.S. and Canada in front of the massive fairgrounds covered grandstands. The world-class assemblage uses the front straight of the one-mile horse racing track.

These annual Games are considered by many as one of the best “band-for-your-buck” festivals in the world!

The full schedule of events and admission pricing can be viewed on the Games website at: www.TheScottishGames.com.