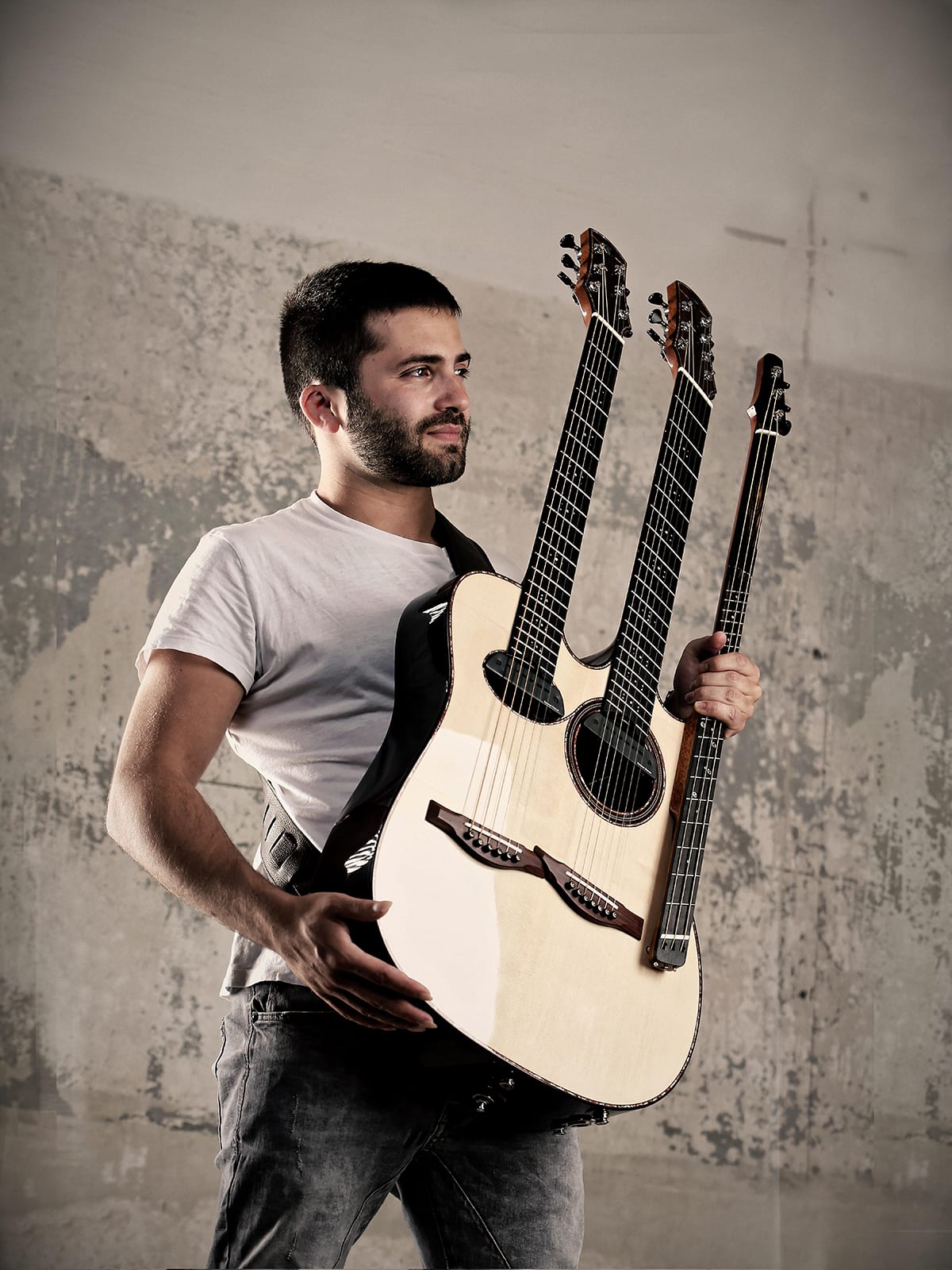 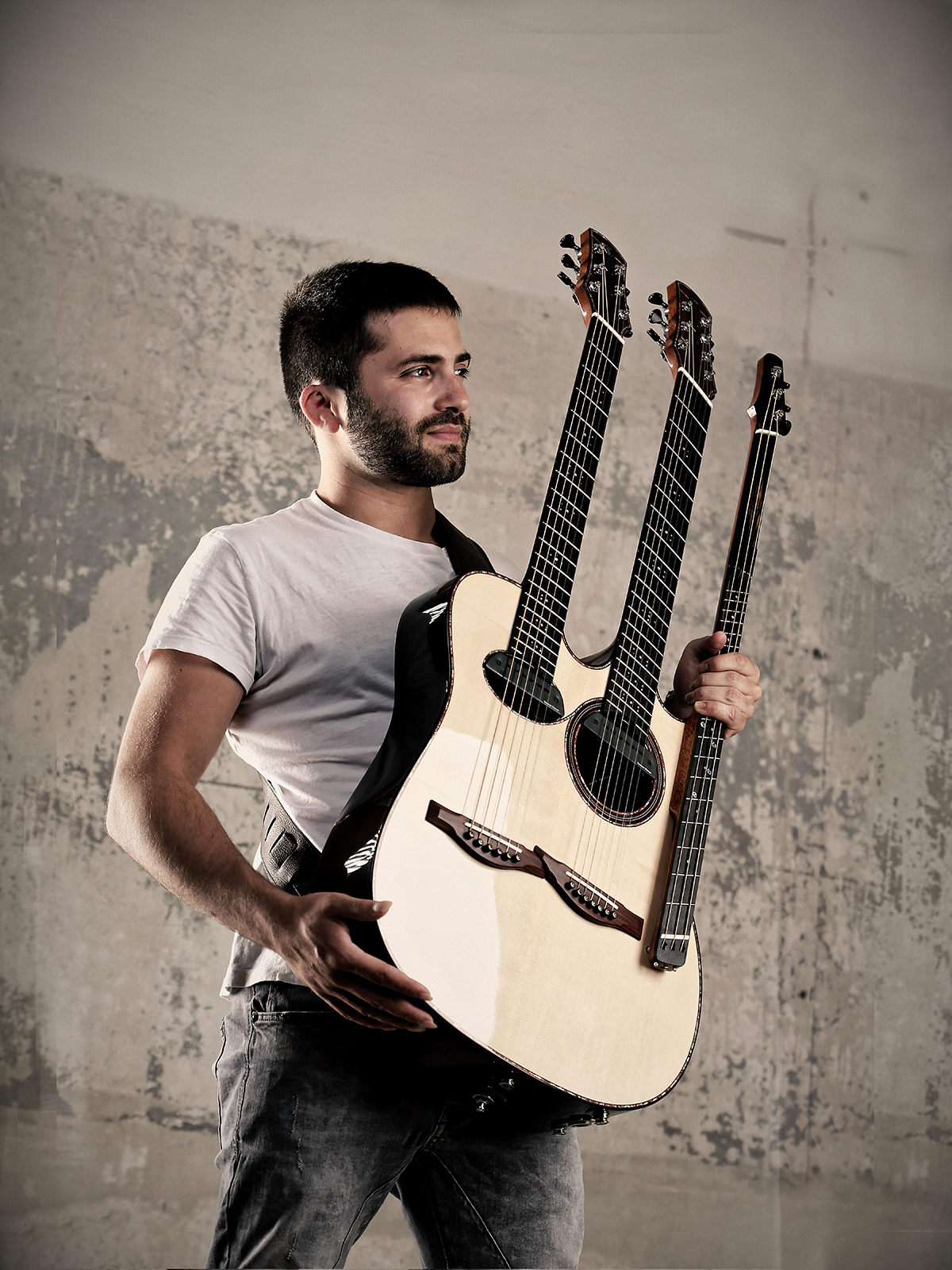 THE INTERNATIONAL GUITAR NIGHT (IGN) is the world’s premier touring guitar festival, each show bringing together the most interesting and innovative acoustic guitarists to exchange musical ideas in a public concert setting. For each tour, IGN founder Brian Gore brings together a new cast of guitar luminaries for special evenings of solos, duets, and quartets that highlight the dexterity and diversity within the world of acoustic guitar. Brian founded IGN in 1995 as a forum for the world’s finest guitarists/composers to play their latest original songs and share musical ideas and talent with their peers.

After thrilling Bankhead audiences in 2017 with his showmanship, precision performance, and arrangements of heavy-metal songs, Italy’s innovative contemporary guitarist Luca Stricagnoli will return as host for International Guitar Night.  Founded by renowned Bay Area guitarist Brian Gore, IGN is now in its 18th year of touring. This unique and intimate annual event serves as a showcase for remarkable acoustic guitar talent from around the world. Joining Stricagnoli will be French Swing sensation Antoine Boyer, Flamenco master Samuelito, and Turkish fretless guitarist Cenk Erdogan. All four will present their latest works then perform together, sharing musical ideas through creative collaboration and exploring the diversity of the acoustic guitar world.

Luca Stricagnoli, born and raised in Italy, is an acoustic guitarist known for his unique style and innovative playing techniques. His original approach to music has garnered him over 100 million views on YouTube and sold-out shows around the world. Using self-conceived stratagems, modified capos, and up to five guitars in the same piece, Luca continually leaves his audiences in awe and wondering what’s next for the up-and-coming guitarist. In addition to his musical abilities, Luca brings an enthusiastic energy to the stage that captivates audiences everywhere. Luca recently released his new album What if? in which he explores even more approaches to guitar playing. The first track of the album, featuring a new guitar invented by him and designed by Davide Serracini, once again obtained viral success with over 30 million views online and features in magazines all over the world. LucaStricagnoli.com

Antoine Boyer drank from the most authentic sources of gypsy jazz. Being a disciple of such masters as Mandino Reinhardt and Francis Moerman, with whom he recorded his first CD-DVD in 2009. The album was acclaimed by French and American critics (Jazzman, Vintage Guitars). Antoine has had the honour of sharing the stage with such renowned musicians as Philip Catherine, Stochelo Rosenberg, Angelo Debarre, Christian Escoudé, and many others. In 2012 Boyer was named “Guitarist of the Year” by Guitarist Magazine, the first gypsy jazz guitarist to receive the honour. www.antoineboyermusic.com

Samuel ´Samuelito’ Rouesnel first picked up a guitar at age 7. He followed a dual path of classical and flamenco guitar, studying at the prestigious Conservatoire de Caen in Normandy. Samuelito’s first concert took place on his sixteenth birthday, on the national stage of Caen and was broadcast by French television. It was the beginning of an international career that has led him throughout Europe, The United States and beyond. Deeply attached to the flamenco tradition, both as an interpreter and composer, this young guitarist plays very personal music, his artistic talents have been sought for other kinds of projects such as film scores, album collaborations, master classes, and magazine tutorials. Samuelito has won many prizes for classical and flamenco guitar including the European Guitar Award with Antoine Boyer. www.samuelitomusic.com

Cenk Erdoğan was born in Istanbul in 1979. In 1997 he won a four-year scholarship at Istanbul Bilgi University for Music Composition, he graduated with First Class Honors. In the years since, Cenk has performed around the globe playing Turkish fretless guitar. He has also been a leading fretless guitar educator, setting up classes, workshops, and a website dedicated to the subject. In 2008 Cenk recorded his first album ILE, which was produced by Baykus Music. He later moved into film composition, writing music for the Turkish romance Issiz Adam. The score won Cenk a Yecilcam Award for Music. In 2016, he arranged and conducted orchestra music for Sezen Aksu, the queen of Turkish pop. Sezenli Yillar has performed 6 concerts with a 35 piece orchestra and visuals and dance shows. The next year, Cenk released his latest album, Lahza, with Swedish drummer Mehmet Ikiz. Lahza is a guitar & drum duo project consisting of original music and live improvisations. He performs regularly with his solo, duo, and trio projets and composes in a wide range of musical styles. http://www.cenkerdogan.net/

“These four talented musicians bring so much diversity and passion to each performance – a treat for every acoustic guitar fan.” –Arizona Reporter